South Georgia and the South Sandwich Islands are situated in the South Atlantic Ocean 1390 km south east of the Falkland Islands. South Georgia is sub-Antarctic and is covered in ice for 6 months of the year. The South Sandwich Islands are even closer to the Antarctic, comprising 11 volcanic islands, some of which are still active, they can be surrounded by pack ice during the winter months.

South Georgia was discovered by Captain James Cook who landed on the Island in 1775. From then on many nationalities of fishermen, whalers and particularly sealers used the Islands harvesting the huge numbers of fur and elephant seals found around South Georgia's shores. Britain annexed South Georgia and the South Sandwich Islands in 1908 and, bar a short time in 1982 when Argentina occupied the islands, they have been under continual British occupation since.

Following the withdrawal of the British Garrison at King Edward Point in 2001 a new scientific facility was opened on the Island. This is run by the British Antarctic Survey scientific and support team. 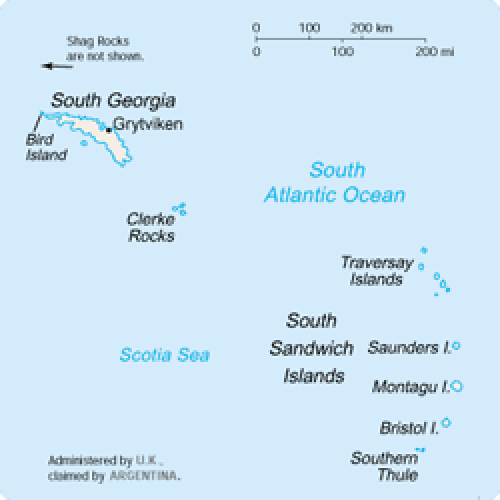